I finally got into the beta today! Downloading it as we speak. Now to catch them all!

What we know about dropped pets so far:
If anyone finds any other info or discovers where a dropped pet comes from, please share!

All sorts of disconnects on the beta at the moment, but I managed to level my garrison Town Hall up to level 3. This unlocks the Pet Menagerie plot (can't build it yet though) and NPCs start appearing in the area.

There's a vendor, Lio the Lioness, that sells the new leveling battle-stones, pet experience treats, and pet-vanity items. She only accepts a new currency, Pet Charm.

My first visit from a trainer was Squirt and her team of legendary 3.

I have a full post with images on my blog for the curious.

Neat. You can see the ability lineups for those tamer pets here (along with all the WoD pets -- there's a bunch more in that list that presumably will be garrison tamer pets):

It looks like those pet charms will have to be plentiful to be of any use; 5 charms for 1 pet level.
Top

Finally, after 4 days of constant crashing

hehehe, I finally got the achievement.

And some notes:
You don't have to do it all at one time, i got like 1 done first day none the 2nd day, 2 the third day, and 1 the last day.
Elekk Plushie does not have to enter battle at any time.

Yu'la
Use 2 Bonkers.
Really need S/S, H/S or P/S, so Bonkers hits first, and dodge Lift-Off.
Tornado Punch if off cooldown - Jab the rest of the time - Dodge When Yu'La lifts off. 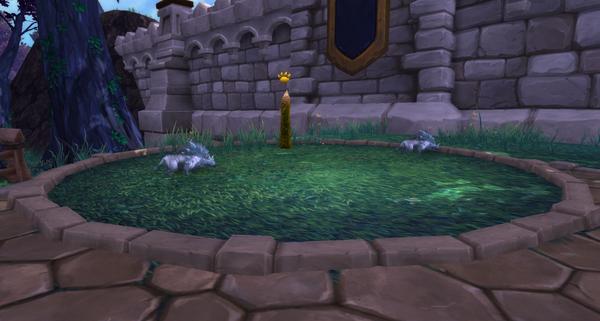 Edit: Both pets have the Hearty Meal buff.

Some stuff to note: Brutus (first pet you face) has an elemental attack, so maybe mechs against him aren't the best idea. He also has a heal based on damage done. So far it seems he uses his attacks in order: [ability]Horn Gore[/ability], Winter Spirit, and then Pig Out. Save your avoidance move for Pig Out IMO.

Today while playing on Beta in Taledor, I happened upon a Teroclaw Nest surrounded by Teroclaw chicks. I thought they might aggro me if I opened the nest, but they did not. The nests contain garrison resources but the first one I opened also had a Grovestrider Hatchling. It looks like a mini version of the Teroclaw Chicks. The location was somewhat near Vol'Jin's Pride.

Here are some screenshots. Sorry for the quality, I play on my laptop with a satellite connection so my graphics are at lowest settings. (click to see larger pic) And here's the pet next to the chicks. Additional info on the abilities:
https://www.tumblr.com/blog/wowkittydps

I can't for the life of me figure out the urls for individual posts. Time to see if beta server is back up...

Are you able to get a level 2 garrison without an alchemist yet?
Carry Pet Experience Reference Guide:
http://www.warcraftpets.com/community/forum/viewtopic.php?f=10&t=8829
Top

Are you able to get a level 2 garrison without an alchemist yet?

I was able to get to level 3 even, but I do have my alchemy plot (although I'm stuck on the "collect a work order" quest for it). Level 3 is when the menagerie showed up for me.

Are you able to get a level 2 garrison without an alchemist yet?

I was able to get to level 3 even, but I do have my alchemy plot (although I'm stuck on the "collect a work order" quest for it). Level 3 is when the menagerie showed up for me.

I think you're practically the only person who got to level 3. lol

I talked to a few people who had lvl 3 garrisons. I still can't figure out how to get level 2. The npc that is supposed to sell more blueprints doesn't have anything for sale. What do I have to do to unlock that?
Top

Kynthea wrote:I talked to a few people who had lvl 3 garrisons. I still can't figure out how to get level 2. The npc that is supposed to sell more blueprints doesn't have anything for sale. What do I have to do to unlock that?

I broke down and checked the wowhead beta. Apparently you have to get to 93 before he'll sell you a recipe. Then you can build a small thing in your garrison and you'll be able to upgrade. I'll know soon as I'm almost 93.
Top

Thank you! I'll have to grind to lvl 93. I actually got a lot of xp battling the crabs on moonlit shore.
Top

OK 93 is confirmed. I hit it last night and then all of a sudden the plan vendor actually had plans to sell me. Built something on a small plot and then the upgrade to lvl 2 worked. There's a spot where the pet battle stuff should/could be but it currently says I need to unlock it with a quest. Didn't have much time to try to figure that out.
Top

Day 3 at my garrison menagerie: Grubbles, Scrags and Stings (all legendary) 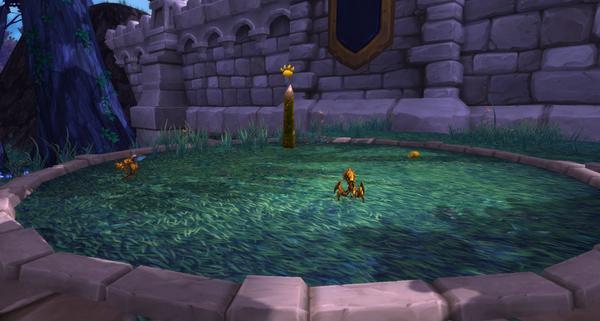 No special team-wide buffs this time. Just your standard pet battle, except against legendary pets.

Grubbles was easily defeated by Xu-Fu, and with Prowl + Feed once Grubbles got below half health, Xu-Fu healed back to full for the next pet. Used him to soak Scrags' stun (seems to always use the stun first) and then swapped in my Skywisp Moth.

The Skywisp Moth handled Scrags just fine, and even had a little bit of health left to take a hit or two from Stings. First attempt I had my moth attack once or twice before letting it die, but the second attempt I immediately swapped to my third pet.

I was expecting the worst with Stings, so my first pick was the Treasure Goblin. My impression was that my pet would be debuffed often and I wanted to avoid the bonus damage from [ability]Punctured Wounds[/ability]. My caution probably wasn't necessary.

Stings seems to use his abilities wildly and in an uncoordinated manner. Sometimes Punctured Wounds will go first, or sometimes [url=http://wod.wowhead.com/petability=1369]Barbed Stinger[/url]. The poison debuff from Barbed Stinger wasn't applied nearly as often as I thought it would be, and once I started using the Fledgling Nether Ray the beast damage from the initial attack itself wasn't too terrible.

Stings is a bit of a silly battler and will refresh Focus often, even if the duration on his existing buff is still high. IF all he spams is focus, it's pretty much a free win so long as you have a strong magic attack.

I've found one egg location in Frostfire Ridge - It is up top a building in north east area of Grom'gar. So far I've opened two and only had egg yolk drop. Have been looking around shadowmoon lately but haven't seen anything yet as far as an egg is concerned. Wondering why it mentions Shadowmoon egg drop - is the one in Frostfire different or is it a tooltip typo?

Didn't see anyone mention grinder is found in Talador - in a cave - north part of shoreline - protected by evil mechanical things and inside a chest.

Took me almost 100 oracles to get Zomstrock also :/

Found the chick in the first nest I looted right next to horde outpost area - there are multiple nests throughout the zone in case you don't find it right away - each nest also gives a small amount of garrison resources.

Explored all around island in Shadowmoon - where Rexxar is. On the smaller of the two islands next to that (the one has a cave on it with Landslide lvl100 elite stone thingy) I found a Scaly Rylak Egg! I opened and it had garrison resource and an aged egg yolk. I'm thinking that might be the egg pet comes from and is not in there yet or its a chance? There are plenty of nests in the area on the two main islands - but none were as of yet clickable. The only mobs that had loot were the Rylaks. I did go up top of main island and attacked main bad guy - Rexxar appeared to help. Freed the big Rylak but nothing happened. Hope some of this helps!!
Top

The level 100 island is my guess where the Albino Chimaeraling will drop too, [profile]Moonone[/profile].

And this is purely speculation, but LeCraft favorited my Tweet where I suggested that Darktide Island would be the place to find the eggs, a la Timeless Isle fashion, sooo... maybe that's him indirectly saying, 'that's right'??? PURELY speculation. Could mean nothing at all.

Moonone wrote:Didn't see anyone mention grinder is found in Talador - in a cave - north part of shoreline - protected by evil mechanical things and inside a chest.


I have found the cave

But not sure how to get past all the security, safely

I'll keep doing death walks till i get close enough to try and open it. 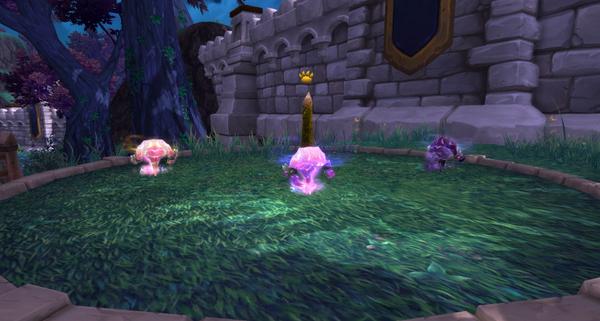 This was the easiest team to beat so far. They're all magic with magic attacks, meaning most mechs will be fairly successful against them.

What concerned me the most was the first opponent, Manos. I wanted to avoid Arcane Storm + Mana Surge or Arcane Storm + Arcane Storm, so I went with a pet that changes the weather. Manos was able to change the weather back at some point but that actually worked in my favor (I think).

My yeti was able to take down the first pet easily and had enough life to get the second pet, Hanos, down to half health. With Arcane Storm up during the battle with the second pet, [ability]Soulrush[/ability] didn't concern me anymore.

Once my yeti died, I swapped in the Pandaren Dragonling. Really effective pet against magic pets since it has an attack that's strong against them, and magic attacks are weak against it. Finished off Hanos and had plenty of health to spare for Fatos.

Much like the previous day with Stings in the bug trio, Fatos really doesn't use his abilities well. He kept spamming [ability]Forboding Curse[/ability] on my dragonling, which meant my pet was pretty much taking no damage from him the entire time. Not to mention it seemed unnecessary of him since the debuff on my pet still had full duration every time.

Needless to say, it was a quick fight. I'll be trying again with the same team a few times just to confirm.