When leveling up a few alts I took notes on how much character experience they got from doing pet battles. The data is presented in the table below. This data is current as of patch 8.2.5. 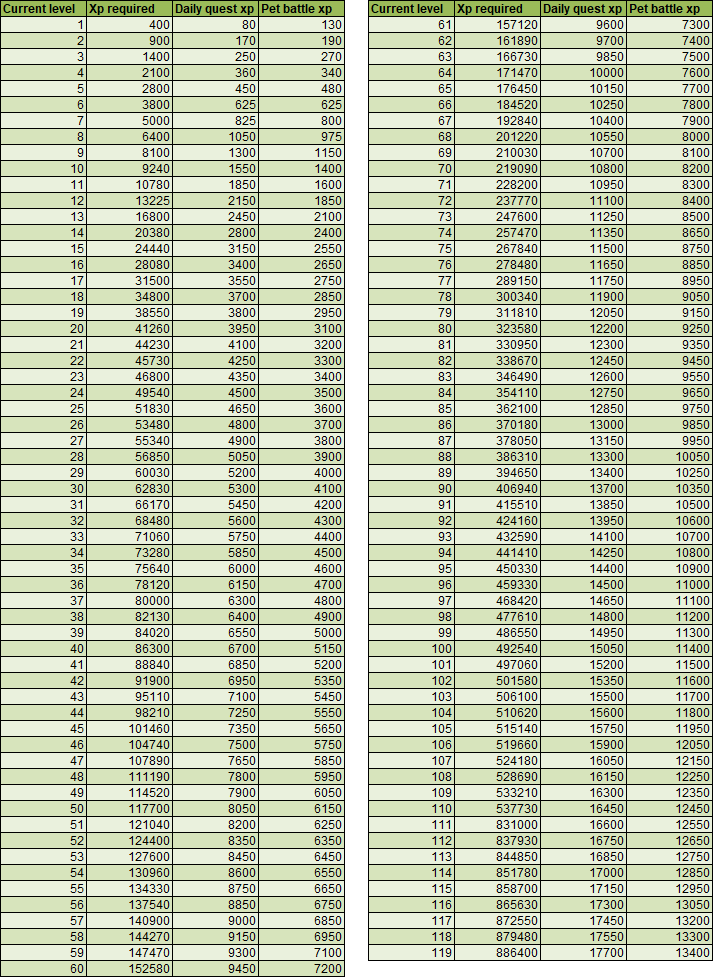 Here is the same data in text format:

Explanation of each column: The Cataclysm, Pandaria and Warlords of Draenor tamers, Major Payne, Crysa, Environeer Bert, Jeremy Feasel and Christoph VonFeasel all have daily quests and their pets are level 25. This means that you will get both the Pet battle xp and the Daily quest xp if you defeat one of them.

If you defeat one of the repeatable Legion tamers, you will only get the Pet battle xp, since there's no daily quest.

If you defeat one of the low-level tamers in the Eastern Kingdoms or Kalimdor with a level 25 pet on your team, you will only get the Daily quest xp, since the battle is then considered trivial.

I wanted to use this data to compare different methods of leveling up characters by doing pet battles. To do this, I timed the most effective methods of doing pet battles I were aware of. These fell into these three categories:
All in all, I compared 15 different variations of these methods. I will describe each method in more detail at the end of this post.

To make this as fair a comparison as possible I opted to do each method as quickly as I could. To accomplish this I used several tricks:
After timing each method I ended up with the data presented in the graph below. The y-axis is the amount of time it takes to level up (in minutes). The x-axis is your character's current level. 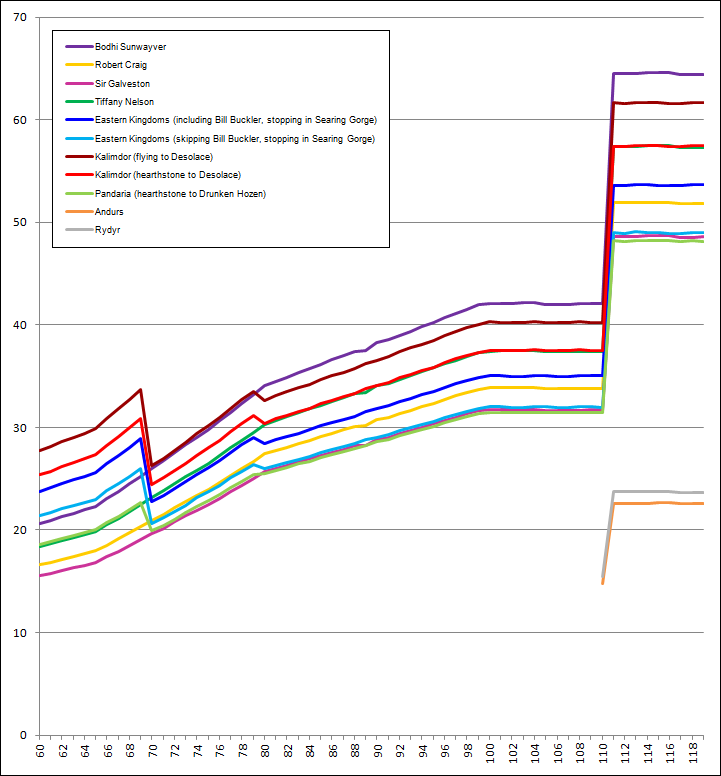 To not make the above graph too cluttered, here's a second graph that shows a few extra variations. 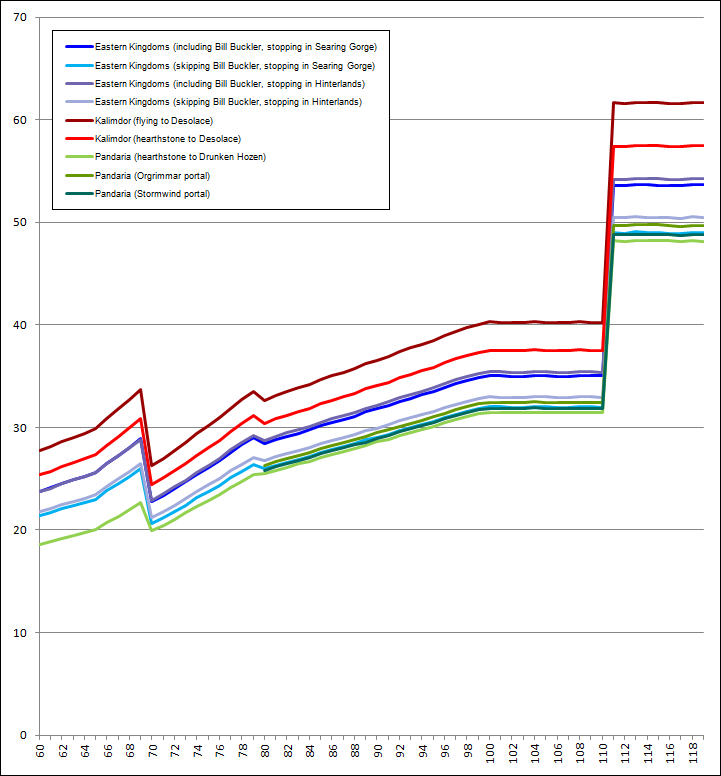 Everything above has been about leveling up characters with pet battles, but most people probably use pet battles mainly as a way to level up pets. All the methods I've compared in the graphs above are methods that include carry pets on your teams. This way you'll level up both your character and your pets at the same time. The following table shows the average time it will take to level up a pet from level 1 to 25, assuming you're wearing a Safari Hat. 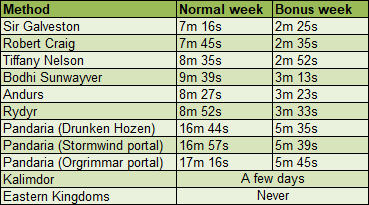 The rest of this post is for describing each method and how I timed them.

This is how I timed all the Legion tamers: I stood in front of the tamer within interaction range with my pets fully healed. I started the timer and then immediately interacted with the NPC, then started mashing the tdBattlePetScript action key. After each battle I healed my pets if I didn't have a replacement set and then immediately started a new battle. I did 12 battles in a row. After the 12th battle I healed my pets a last time. After that I immediately stopped the timer.

For this tamer I brought three Court Scribes and three H/S Surgers. Both these pets were really cheap. With three copies of the pets I only needed to heal my pets after every third battle. This way you will save a lot of bandages and also a small amount of time.

I had one set of pets for this tamer, so I healed my pets after each battle. Since I timed this there's been a new strategy published, using a Stormborne Whelpling and Iron Starlette. It's said to be slightly faster.

I had one set of pets for this tamer, so I healed my pets after each battle.

I had one set of pets for this tamer, so I healed my pets after each battle. I used the TD script listed with the strategy on Xu-Fu's website when I timed this, but during my 12 battles I noticed the script several times playing suboptimally (using one ability when another ability would've finished the battle on that round), and during one battle the script got completely stuck, which took me a few extra seconds to respond to. I've posted a script in the comments over there that take these problems into consideration.

The exact same strategy works for both of these.

These two are a bit different than the other Legion tamers. You can only fight one of them over and over again, if you defeat both of them you will complete their world quest and you can then no longer interact with them. To battle them you also need to have Legion world quests unlocked on your current character. You unlock world quests by completing the quest Uniting the Isles. This quest has a level requirement of 110, which means you only can battle Andurs or Rydyr on characters that are level 110 or higher (the other Legion tamers are available to characters of any level).

When I was timing Andurs and Rydyr, I used three Draenei Micro Defenders and three Crimson Spores. This way I only had to heal after every third battle. Battling one of these for an extended amount of time will still eat a lot of bandages, since each battle is so short.

The Eastern Kingdoms tamers are for Alliance players only. You can read the full details of how I level using these in this guide.

With my pets fully healed, I start in Stormwind in the position shown in the following screenshot, already mounted on my flying mount. 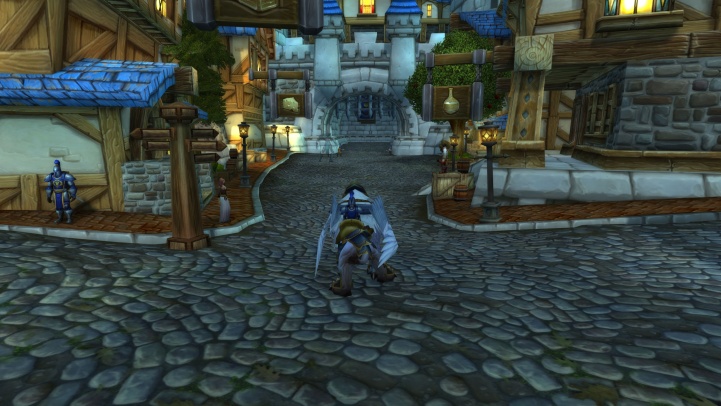 The Kalimdor tamers are for Horde players only. You can read the full details of how I level using these in this guide.

With my pets fully healed, I start in Orgrimmar in the position shown in the following screenshot, already mounted on my flying mount. 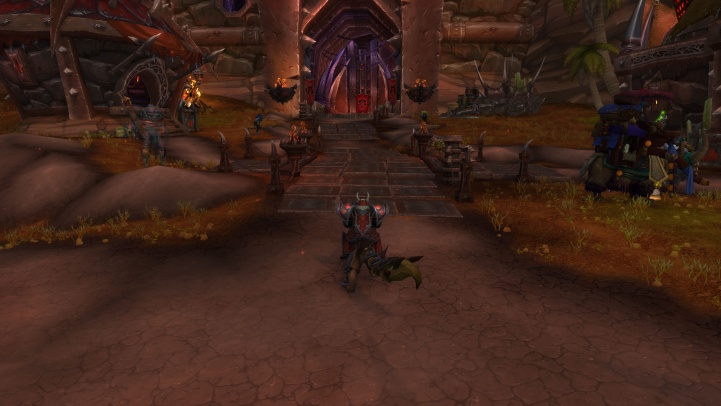 The strategies I'm using to defeat the Pandaria tamers are by Salty Goldfish. His strategies were consistently the fastest and most reliable I could find for each of the tamers. You can find his strategies on his YouTube channel or in his Wowhead comments. He didn't have a strategy for the Whispering Pandaren Spirit, so there I'm using my own simple strategy. 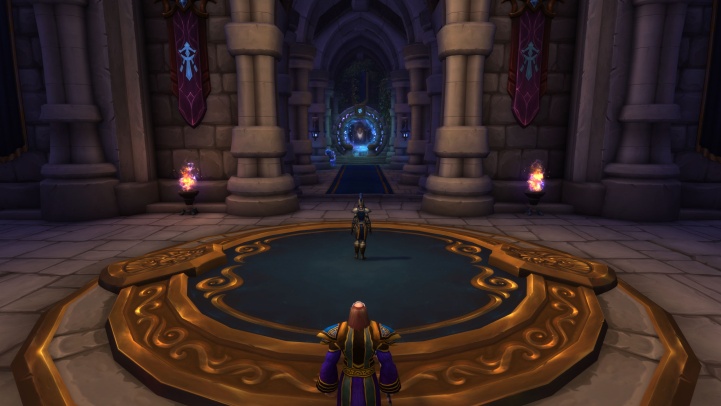 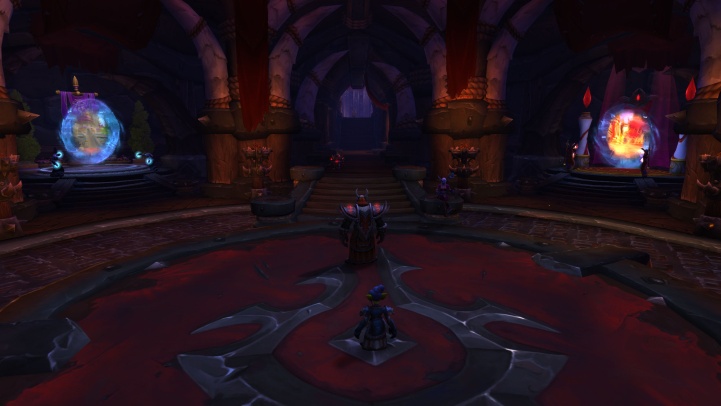 Now here are more details about each individual tamer. I wrote TD scripts for them since scripts didn't already exist for Salty Goldfish's strategies.

Hyuna of the Shrines

Salty Goldfish had no strategy for this tamer, but I use two P/P Nexus Whelplings with Arcane Storm, Mana Surge, Tail Sweep. It's fast but not completely reliable.

Team: River Frog P/P or Slithershock Elver P/P, carry pet (it will take 315 elemental damage, up to 472 if the enemy crits 3 times), Dibbler (any breed)

Team: carry pet (it will take up to 536 elemental damage), Blackfuse Bombling (any breed), Ikky

The script here is incomplete. Sometimes you will have to use Healing Wave when facing the last enemy pet, but I haven't figured out exactly under which conditions.

I've done a minor change to Salty Goldfish's strategy here. Instead of going Supercharge + Wind-Up at the end, I go Wind-Up + Toxic Smoke. This way you will save one round if Wind-Up happens to crit.

I've been using a P/S Zandalari Anklerender here since I don't have a P/B in my collection, and it has been working fine. Using the P/B breed is probably slightly more reliable.

Thanks for taking the time to do this. I have a few alts I need to level so I am going to give this a bash

. I am rather tired of questing through all the same zones again

Edited to add that with the WoW 15th anniversary buff it’s an additional 10% XP. I was levelling my level 113 in Voldunai with pet battles and I got just over 15K XP per battle.
Top

Awesome post, must have put a LOT of work into that.

Just a couple of notes that would explain why we might not see exactly same numbers as yours for player XP.

As A-Leopard pointed out there's currently that lovely 15% Anniversary boost. And it's not just a one week thing, lasts till January 7 of next year.

Also your mileage may vary depending on your faction. Blizzard introduced a handicapping system that keeps track of which faction is doing better with PvP kills and adjusts the War Mode XP bonus each week to try to help out the losing side. Horde apparently been pretty much ruling PvP, currently War Mode giving 10% buff to Horde, 25% for Alliance (was only 20% Alliance last week but have seen it going as high as 30%).
Top
Post Reply
3 posts • Page 1 of 1