I've seen on US forums that it has something to do with adjusting time-zones of the servers.

But saying that was a result of general big patch syndrome shouldn't be so far from the truth, either.

Paladance wrote:I've seen on US forums that it has something to do with adjusting time-zones of the servers.

Did they make an adjustment to server time-zones?

The only blue post I could find related to reset timers is a change to when dailies reset.


reset timers for recurring in-game activities such as daily/weekly quests and raid/dungeon lockouts will be updated to a single unified lockout time of 15:00:00 UTC (8 a.m. PDT / 1 a.m. AEST) for all North American, Latin American, and Oceanic realms.

My guess is that the Menagerie daily is still a daily, but the change to when stuff resets has done a number on a few quests. Hopefully it will get sorted out soon.

Hi,
My experience on live after the patch a few moments ago.

About the daily. All level 3 pet menagerie.

Bugged somehow maybe there is a timeout.. quest is available after x amount of time after entering in garrison?

On 19July after servers came up I was able to get the quest multiple times but it only rewarded once. So there are strange bugs happening here.

I had a similar issue with the pet daily in the Garrisons a few days ago when switching from Alliance to Horde...one could do it but other could not. Hope this gets fixed soon--the charm nerf was bad enough, but now I can't even do half of the quests which is making it even harder to get charms.

Definitely some problems with the Menagerie daily, but you can get around it. At least I've been able to.

Seems like bunch of my toons with Menageries find the questgiver with no blue exclamation point and no quest. If they log off and log back in again this always seems to fix it, can now get the quest. This has worked for both my Alliance and Horde characters.

Have also noticed that after doing daily and logging off, if same toon logs back in later the questgiver will give you the quest a second time. But doing it again it won't show as completed and can't be turned in.
Top

After today's reset, my first toon doing the menagerie daily got the quest normally and completed it. Since then none of my other characters have been able to get the quest. Have tried 10 different toons, both Alliance and Horde, on 4 different realms with no luck. The work-around that used to handle it, logging off and back on, no longer makes any difference.

Daily today is Squirt. Doing it without having quest still gives lot of XP to a carry pet.

There's also something strange going on with the weekly Battle Pet Tamers: Warlords. Just got it for the 3rd time this week.

EDIT: On my 16th toon to try it, did get the menagerie daily quest a second time. Seems like it hasn't intentionally been changed to a once-per-account limit, is just glitched.
Top

This "issue", and I use air quotes to emphasize this, is only getting worse. I have gone from being able to accept the quest, but not turn it in, to only being able to complete it on one character over the course of this past week. The quest doesn't show up for any of my other 10 lvl 100's now. There has been no comment from any admin or gm acknowledging whether this is an actual bug. I am operating under the assumption now that:

1. Blizzard doesn't really care about supporting pet battling issues in the pre-patch and considers it a minor issue not worth addressing at the moment.
2. They did this on purpose and meant to make this an account wide daily. People have posted on WoW forums screenshots of the quest being account wide in their quest log.
Top

I just logged on to post about this... glad it's not just me, sorry! Hopefully they'll fix it soon.

I did not play the alpha or beta, but if this was an issue during that and not resolved, they need to hire new personnel at Blizz, cause the current ones suck. It seems status quo now to go live with a beta before all the bugs are ironed out and use us as the beta team for a month or two. Professionalism with this company has gone down the toilet. Probably because they are not offering competitive salaries. The saying goes you get what you pay for. I am going to stop playing until the second week of August, the rolling restarts everyday, patches everyday and jacked up quests everyday is too much for me.

Just want to add that Warcraft Pets.com rocks, can't say enough great things about you guys. Thank you so much!

It's not precisely on-point to this thread, but it is sort of a follow-up to the whole pet charm nerf and I hadn't seen it mentioned anywhere else... I'm working (sloooowly) toward my Deadly Pet Brawler achievement.. and I -have- gotten pet charms (2 or 3) as a reward for lvl 25 pvp pet battles.

They're RARE (roughly the same drop rate as flawless stones)... and not an alternative to what we had before.. but they are confirmed to be dropping (see screenie below). 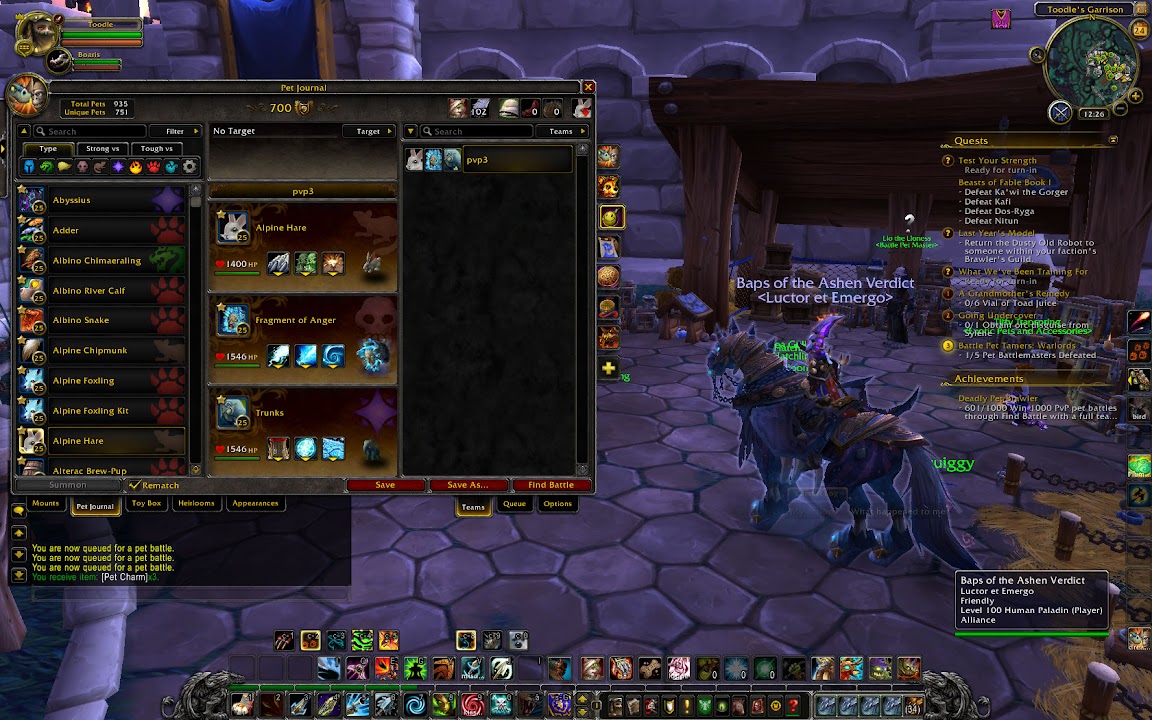 Well, considering yesterday there were NO menagerie battles offered, nor this morning and I noticed none of my crafting cd's had reset, Bliz is doing strange things. Apparently there is an indication that Bliz has changed the reset time to 8 am PST for their convenience so no one has to be up at night to 'hit' the reset button (my best guess). I'm finding this rather annoying.

Sunday AM after reset - once I did the menagerie on one toon, it was not available to any other.

As a social comment, this seems to be the type of reward one can expect from Bliz for players treading water for the past nine months waiting for new content.
Top

After 2 days of no menagerie daily and no battle master dailies, I decided to delete the game and re download/install it. That fixed the broken dailies. Still had to re-log in like 8 times to get the critter daily to appear. All I got to say is someone is in over their heads. I feel sorry for whoever is in charge of resolving all these issues. This is without a doubt the worst expansion launch ever.
Top

1.) Characters not being able to pick up/complete the Menagerie daily is a bug.

2.) Blizzard changed the Menagerie daily to account-wide (or intended to) in 7.0.3, and it's a bug that multiple characters are still able to pick up/complete the quests.

Still no official word on which one it is though.

Edit: A blue post was pointed out to me on Twitter. It's on the German Bnet forums, but a quick Google translate does reveal that yes, the Menagerie daily is intended to be account-wide as of 7.0.3.

Quintessence wrote:It sounds like one of two possible issues:

1.) Characters not being able to pick up/complete the Menagerie daily is a bug.

2.) Blizzard changed the Menagerie daily to account-wide (or intended to) in 7.0.3, and it's a bug that multiple characters are still able to pick up/complete the quests.

Still no official word on which one it is though.

My question is, after 2 years, why is this now all of a sudden an issue. I am clueless. Some people already have over 10,000 pet charms, so it doesn't really matter limiting it to 1 character per battle net account now after 2 years. Was this a glitch for 2 years and never intended? Oh, well I guess we will never really know.

God, I kept telling myself that this can't be true... What a waste. 11 100's, 4 of which I only leveled for the pet menagerie and garrison perks. I feel really bad for those that didn't get their 1000 charms to buy the new pets and toys from the vendor before the pre-patch. It will take an eternity now.

At least they haven't nerfed Squirt yet. I was able to level about 30 pets yesterday.
Top

Was gone for 2 days, and considering I have 2 paying accounts, with 10 characters at 100 with Menagerie 3, I could only do one of them today. None of the others were offered the quest regardless of a reload or restart and such.

Disappointing, specially for people paying twice, and one of the accounts is not able to do it, because of their Battle.Net idea.

Very sad, and this might just be the last straw to get me to quit after something like 12 years ... tired of stupid nerf's and the dishonesty all around it by Blizzard, and before them, Sony.

It's their loss, not mine. I can find things to do, but this is really sad!
Top

Are they going to reconsider reset times? Because the standard weekly announcement here says the next realm restarts would last up to 6:00 CEST, what is three hours before our recent reset.

Or are these steps not connected anymore?